A Rug auction is a vivid and theatrical experience to onlookers and an economic necessity to those who produce the carpets. Suzanna Clarke visits the one held in the Middle Atlas town of Khenifra. 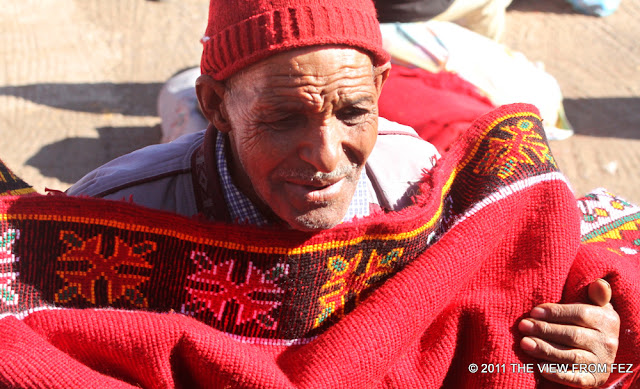 Red is the colour primarily associated with the Middle Atlas town of Khenifra, 165 kilometers from Fez and 300 kilometers from Marrakesh. Not only is it the vibrant hue of the hills and escarpements of the surrounding Meknes-Tafilalet region, but it is also the colour of the blood spilt during the many battles fought by the proud Berber tribe of Zayane, who are the main inhabitants.

The name Khenifra comes from the Amazigh (Berber) word Khanfar which means "attack ". A vital staging post on the trade routes, during the twentieth century the region was fiercely resistant to French colonisation. It wasn’t until 1920, after numerous bloody battles, that the Zayane and neighbouring Berber tribes with whom they had united, were forced into submission. However, they were never entirely subdued and popular uprisings followed. 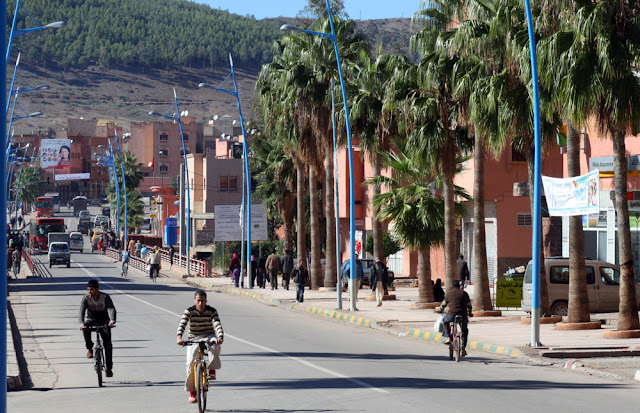 Nowadays, the palm tree-lined streets of the city, with their pink toned buildings, are clean and relatively affluent. The main street features a sculpture of a Berber clasp, or fibula. 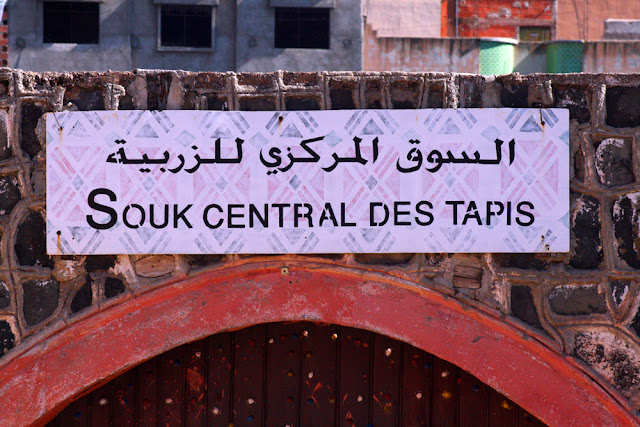 A short walk away is the central carpet souk. Here, the colour red also predominates in the hand woven rugs on sale in the small shops around the fringe, and there are also other vivid colours along with white and black. 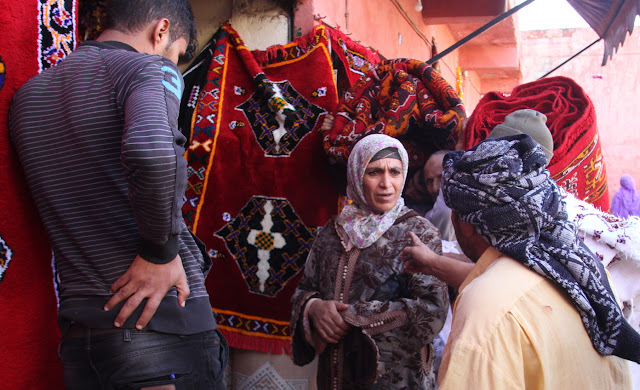 In the centre of the souk is an open area, with benches on the side, which is regularly used for carpet auctions. It is here the women from the villages in the region come to sell their wares. These carpets represent months of work by groups of women, who make styles and designs distinctive to their area. Usually, the two senior women of the village go to the souk, carrying their bundles, to do the deals. Naturally, the price they can achieve will have an impact on the kind of winter they and the rest of their village will endure. 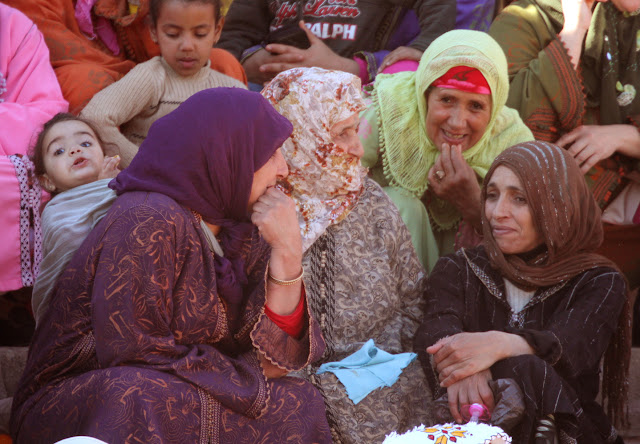 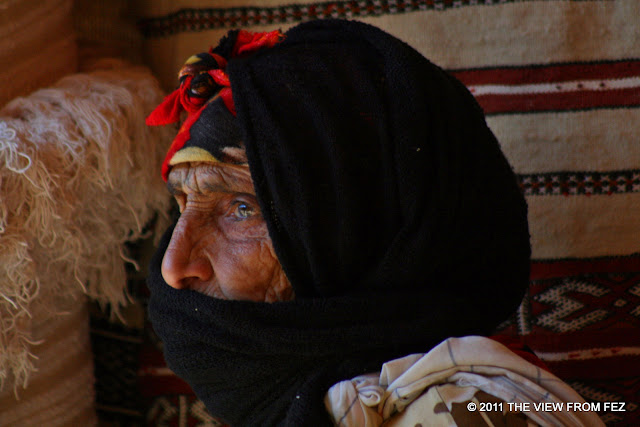 The women gather at the souk hours beforehand, to await the other players in the process – the dallal, or auctioneers, and the carpet dealers, who have small shops around the fringe. 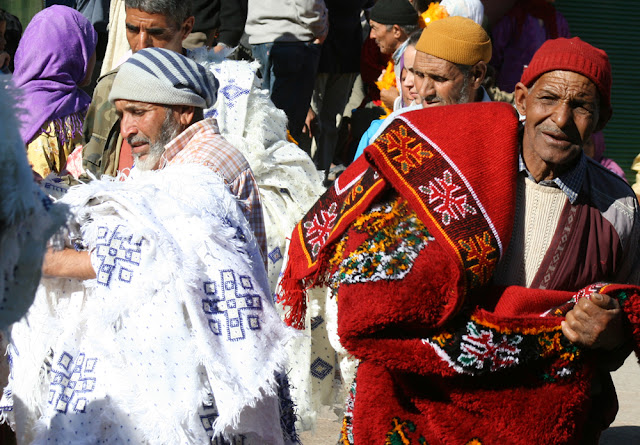 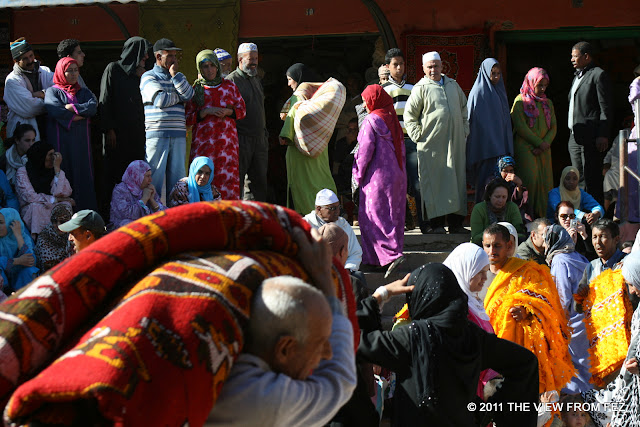 When the auction starts, it is like the opening of a play. From the wings come a line of wiry, weatherbeaten men – the dallal, lugging carpets that look almost as heavy as themselves. The carpets are unfurled with a flourish, for the appreciation of the attentive audience. An opening price is called and the auction is on. The dallals are in constant motion: as well as displaying the carpet to the crowd, they ferry it around the carpet dealers in the shops, who may also bid. The bidding begins when the first bidder shouts “Oukha” or “okay”. It’s done in the colonial currency of reals, in jumps of 100 reals at a time. (The equivalent of five Moroccan dirhams, or 63 US cents.) 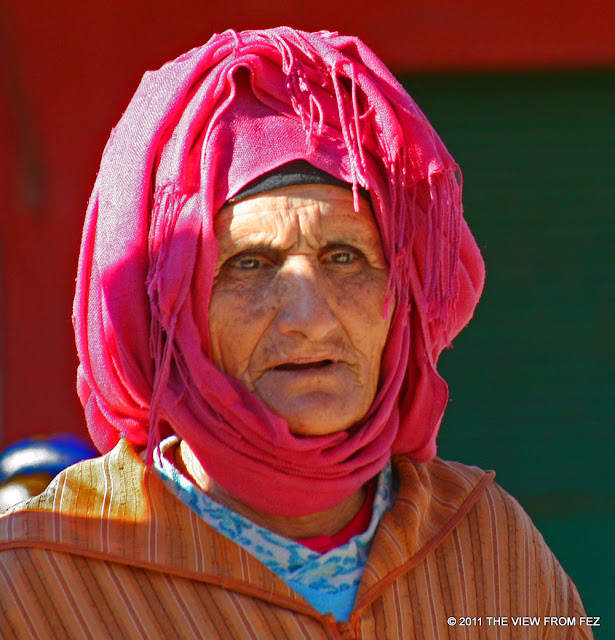 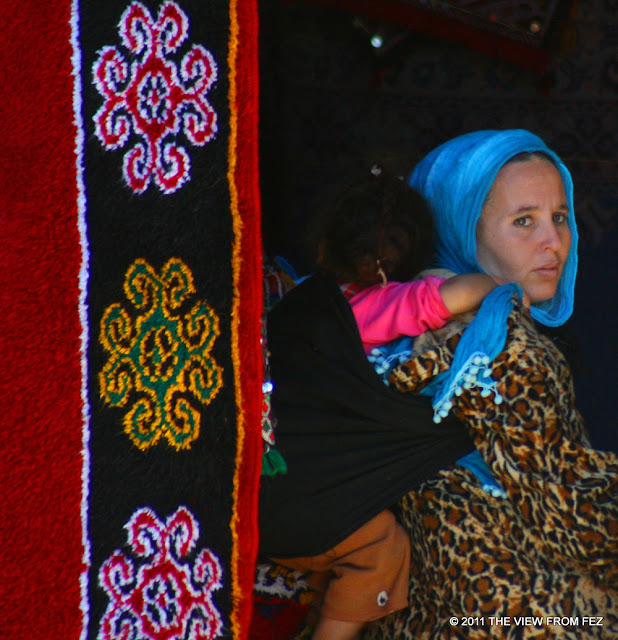 The women from the villages watch with a mixture of patience, wry amusement, and delighted smiles as their carpet reaches the hoped for price; or anxiety if it fails to sell despite making the rounds repeatedly.

When there is only one bidder remaining, then he - and it is usually a man - is declared the winner, and the money is handed over directly to the seller. Both parties then give a small commission to the dallal. 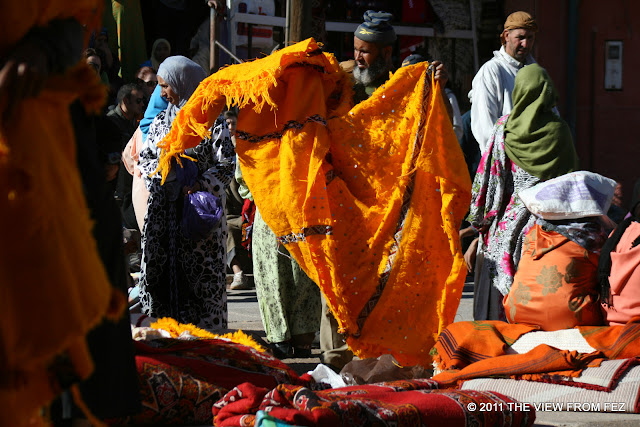 Some women choose to sell their carpets straight to the dealers. They may achieve a higher price at auction, but they run a risk if it fails to sell, as a dealer may see it as an indication that the carpet will be difficult to move. 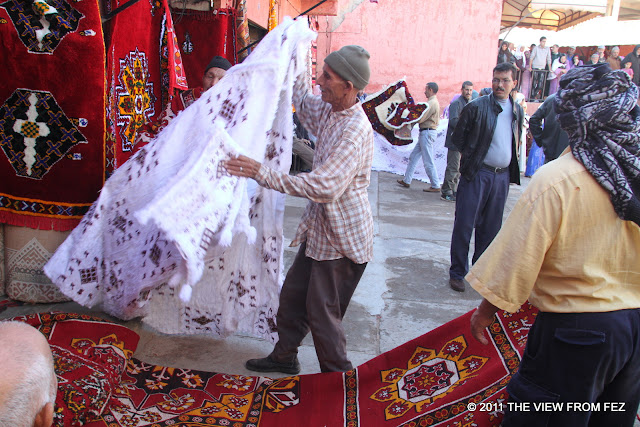 Interested buyers also flock to the auction, to get the pick of the carpets. The dealers pass the carpets on to the big carpet shops in Fez and Marrakesh. So a carpet for which a group of women may have received less than a thousand dirhams (US $125) can end up selling for many times that by the time it reaches its final destination. 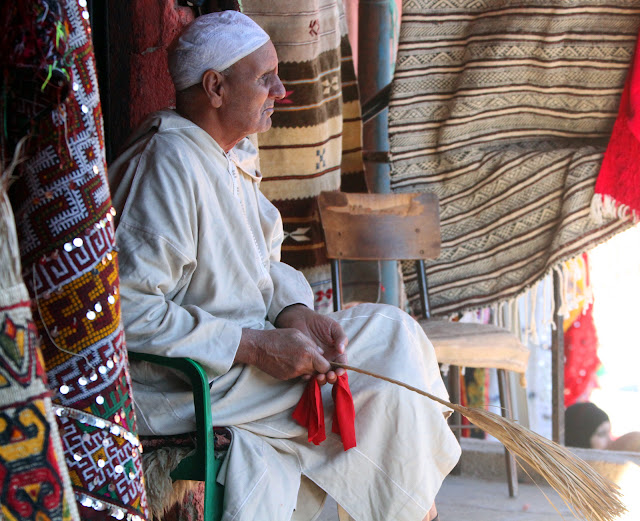