The beginnings of the Berber carpet, its origin and the meaning of its motives goes back very far. It does not come from Oriental carpets of the Islamic era, but the similarity of the technique of knotting and certain motifs indicates common roots, probably dating back to the Neolithic of Asia Minor. Away from the great civilizations of Antiquity and far from the cultural exchanges of the Silk Road, the Berber carpet has kept its originality in the mountainous regions of the Atlas and the Atlantic plains. 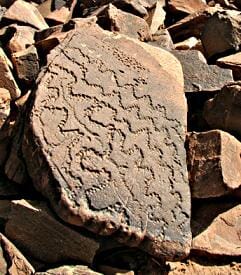 When the motifs of the Berber carpet are brought closer to the signs of parietal art and the artefacts of the first cultures of man, we find the same principles in the use of signs and forms, and we discover astonishing similarities between them. correspondences, even with the phenomena of the Upper Paleolithic of Europe, the Neolithic of the East and the Mediterranean basin. Thus, the Berber carpet can perhaps be considered as the last testimony of this archaic world.

Be that as it may, the abstract and geometrical language of the Berber carpet is derived from the origin of the body, the form and the functions of the human sexual organs. Based on the duality and the encounter of the two sexes, it becomes the expression of a magic of universal fertility, including all nature. Artistic creation of the Berber woman, her carpet reflects above all the phases of her life and the experience of her sex life: as a virgin, as a new bride, the union with man, pregnancy and childbirth.

In the XIIe and XIIIe century, the beauty of carpets or wall hangings ("hanbel"), as well as the place that this production occupied in Morocco were already underlined. In the Middle Ages, the carpet was among the gifts won by foreign embassies or in the pageantry of a princely caravan where camels were seen in silk and gold threads and carpets ("zarabi ") Of unparalleled beauty. Among the different meanings of the term "zarabia" (carpet), of Arab origin, we will particularly remember that of "flowerbed" or "what is stretched on the ground and on which we take support". The Berberized form is "tazerbyt". In Morocco, we also use the word "qtifa", of the same origin, which refers to the carpet wool high woven generally in high-altitude areas among the Marmoucha and Aït Ouaouzguite. In the 16th century, Jean Leon the African (Al-Hasan ibn Muhammed) specified that the carpet was part of the trousseau of the bride of Fez: "One gives still a carpet with wool long of about twenty cubits and three blankets of which one face is a sheet ... " The carpets were also sold at auction in Fes and exported, especially to Black Africa. They were renowned for their finesse in the majestic qoubba ("dome" in Arabic), ablution centers for believers going to the mosque. Original works of art dating from the 17th century: In Morocco, the oldest preserved carpets date back to the 18th century: that of Chiadma, for example, is accurately dated (1202h / 1787J.C.).

In the twentieth century, the carpet industry is transformed with the intervention of the Native Arts Service and the drafting of an incomplete but valuable directory. Ancient specimens are still found in some Moroccan museums (the Oudayas Museum in Rabat, Dar Batha in Fez, Dar Si Saïd in Marrakech). Experimental workshops have been set up in some cities, notably in Rabat, and new or renewed techniques of manufacturing and dyeing have been studied and implemented. These workshops developed models of old pieces and prepared vegetable colors according to traditional recipes. These products, then made available to the weavers of Rabat, regions of Meknes and Marrakech, have resulted in carpets faithful to older models. The symbolism of the Berber tradition is often referred to as the “Infinite Rapport”, meaning the pattern and the spirit of the work extends beyond its physical borders. Many examples of Berber carpets show shifts in pattern, reflecting a change in life events, a different weaver taking over the rug, or spontaneous creative expression. As many Berber women believe the rugs are imbued with a spirit, either from the imprint of the artist or from the living nature of the wool, they resist monitoring the progression of their work, often revealing the entire rug only after it has been completed. Once the deeply laborious weaving process is completed, the finished rugs are considered part of the family and are the prized possession of the home.

The Berbers carefully preserve their heritage of technique and knowledge passing down messages in wool from one generation to another. While preserving history, the elemental nature of Berber weaving is an execution of pure instinct. Weaving is not only an inherent rite of passage, but also an act of expression. The women that manifest these works have a story to tell: While some rugs document a personal experience, other weavings carry a more ancestral message passed down over time. Many of the artists artisans weave their tales organically, while others intentionally channel inherited knowledge into the loom. The life rituals of the Berber women, including fertility, birth, and the protective role of men, are narrated in an abstract form. It is pure coincidence that the Berber carpets, with their simplistic form and geometric purity, appear modern to the Western eye, Henri Matisse 1915 Morocco in his collection Matisse in Morocco and others, like Pablo Picasso. As each one is deeply rooted in ancient history.